Love Southsea is a Portsmouth-based events movement, dedicated to hosting some of the city’s best days out, and specialising in markets, both standalone and as elements of larger events.

When Love Southsea’s founder, Louise Whitmore, founded the organisation in 2008, she did so with the intention of giving local traders and creators opportunities to sell their wares, providing more things for locals and tourists to do, and ultimately giving prospective visitors another reason to come to Portsmouth.

Since a humble start with smaller markets at the Square Tower in Old Portsmouth, Love Southsea has grown organically, amassing a network of partnerships with some of Portsmouth and Southsea’s most talented craftspeople.

In September 2013, Love Southsea received news from Portsmouth City Council that an average footfall of 8,000 people had been reached at regular Palmerston Road markets.

The main monthly markets, which moved from Old Portsmouth to Palmerston Road early last year, now seldom fall below the 50 stalls mark, resulting in a struggle to fit everyone in as Palmerston Road’s market space bursts at the seams!

Love Southsea has also hosted a variety of other events, including markets at the Easter Eggstavaganza at the Hotwalls and the Rural & Seaside Show 2013, children’s parties at Hallowe’en and Christmas, markets in the central square of Gunwharf Quays, the Underground Creatives Market at Portsmouth Guildhall, and Victorious Vintage at Portsmouth Historic Dockyard in 2012.

A photo from one of Love Southsea's wintertime markets. 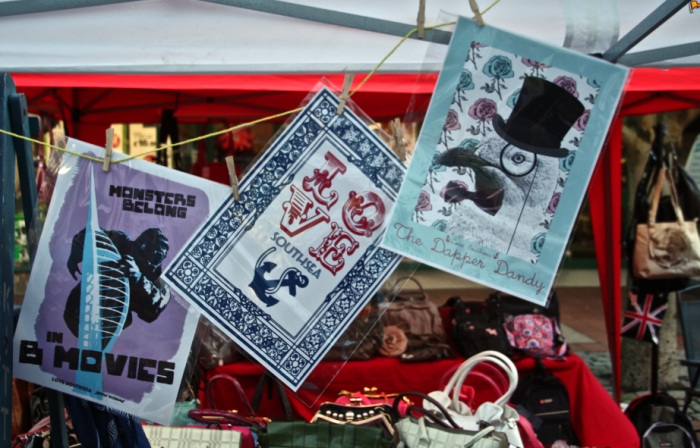 Traders selling at one of Love Southsea's Palmerston Road markets.